Borders On Our Skin

If you really think about it 'borders' are fascinating things. One of those many things which are inconspicuous but truly fascinating by all means. A part of me would always remain to be suspicious of the wretched souls who made sure that people are torn between numerous borders.  There is a certain  kind of melancholy associated with the very idea of trying to make some sense out of it.

Of all kinds of borders and barbed wires festooned, to me, people seem to carry the most pertinent ones with them. What could be the nature of force that has worked behind drawing vivid borders all across the existence of human beings? One can only wonder about these things! As far back as the human history goes we are being reminded about different countries, ethnicities, languages, religions and never to forget our skin colour. If not necessary it is okay to defy these identities etched on our skin by an extrinsic system.

Despite tremendous dictation there has always been people who have strived to transcend various borders. Authors and story tellers have found their calling in the form of  'words' in these ongoing battles. Curiously, we have been calling it fiction. We have stories about werewolves and centaurs to read, its very existence among us itself is an act of rebel. To feel fewer conflicts in our body and mind we could perhaps read about them.

Where does one end and the other starts? All because we have been taught that there are numerous borders which run through us, it's utterly pointless to live divided. It is a funny thing that how easily it evades us the fact that we are all porous creatures, the way we are intertwined at the core, how we can bleed into each other.

Something I've always wanted to do, is to play around with wool and it's amazing artistic transformational capabilities. It just su... 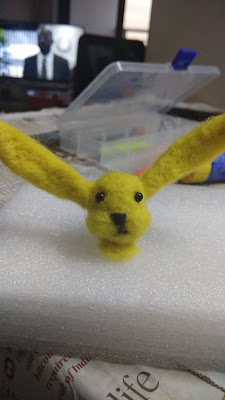